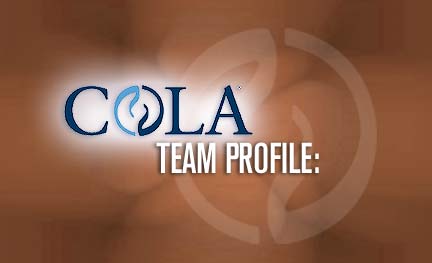 Becky Ritterhouse has worked in laboratory medicine for more than two decades. She’s been part of it her entire working life. But her connection to the profession began long before she ever joined it.

“I wanted to become a medical technologist ever since I was in the sixth grade,” she remembers. “Growing up, my neighbor told me stories of the difference she was able to make in people’s lives.”

As COLA’s Assistant Accreditation Division Manager, Ritterhouse is responsible for assisting in overseeing COLA’s laboratory accreditation program, including the personnel, and the achievement of the division’s goals. Her experience with COLA started even before she came to work here.

“I worked with lab information system used in physician office labs, many of which COLA accredited,” she explains. “This gave me an opportunity to interact with and become familiar with COLA, its mission, and its people.”

When the opportunity to work at COLA arose, she regarded it as a new challenge as well as an opportunity to use her prior experience and knowledge. “In terms of the lab industry, I had worked in a lab setting, for a manufacturer, and for a trade association,” she notes. “Working for an accreditor was the one thing I had not yet done.”

Just before coming to COLA, she worked at Antek HealthWare, LLC, where she developed a program to convert older systems to current version software and created and administered new customer training programs. Before that, she was the Manager of Education Programs for the American Association for Clinical Chemistry (AACC), and worked in similar capacities at ICN Pharmaceuticals and Becton Dickinson in Baltimore.

She says the best things about working at COLA are the mission, the people, and the opportunity to stay connected with laboratorians. For her, a good day at work is one in which she provides answers to surveyors and customers to help them achieve their goals.

“We really are here to help our customers,” she states.

As for the thing that first attracted her to the laboratory sciences: The opportunity to make a difference in the lives of others? “It’s still true,” she assures.